This Sliding Bar can be switched on or off in theme options, and can take any widget you throw at it or even fill it with your custom HTML Code. Its perfect for grabbing the attention of your viewers. Choose between 1, 2, 3 or 4 columns, set the background color, widget divider color, activate transparency, a top border or fully disable it on desktop and mobile.

Polish custom bike manufacturer and owner of GOC Harley-Davidson® Rzeszow, the largest H-D dealership in Poland and Central-Eastern Europe, will display the world’s first tattooed motorcycle, The Recidivist, for the first time in the USA.

The Recidivist, as the bike is branded, was created by GOC and unveiled in September, 2014, and its first presentation in the USA will take place at the 77th Annual Sturgis® Motorcycle Rally and at the Labor Day Weekend Rally in Milwaukee, WI. The motorcycle will appear in America with its new element, a fully tattooed sidecar, which will have its world premiere at Sturgis.

The Recidivist is a machine inspired by the art of permanent body adornment. Motorcycles are commonly adorned with tattoo motifs using an airbrush. The uniqueness of The Recidivist is that the bike’s entire construction is covered in tattooed skin branded directly onto the bike’s tires, tanks, seat, rear fender, lamp and many other smaller elements. Light-color cow hide leather – similar to the color of human skin – is engineered onto the bike. Artists from Polish tattoo studios applied traditional works of tattoo art on the bike creating The Recidivist, the world’s first tattooed motorcycle.

The worlds of motorcycles and tattoos have long been kindred spirits. The theme of The Recidivist relates to this traditional relationship. In the USA, bikers use tattoos for personal reasons – to express their character and lifestyle – as well as their social attitude. The Recidivist is an artistic vision which references those traditions. Through its construction and details, it presents a story of a man with strong character – a person who values individuality, personal expression and sense of freedom. 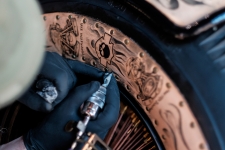 Furthermore, the machine’s design is based on a number of technical solutions drawing from the turbulent lifestyles of post-war bikers: The lever starting the bike has a shape of a bomb detonator lever; the rear light indicators look like brass knuckle-dusters; front wheel caliper brakes have the appearance of handcuffs; front clutch and brake handles are formed in the shape of “butterfly” knives; and, the break pump lever is shaped in the form of a section sign.

The bike is based on the Harley-Davidson® Softail model. Its unveiling took place in September, 2014, at the 2014 London International Tattoo Convention which is the most prestigious body adornment convention in the world. 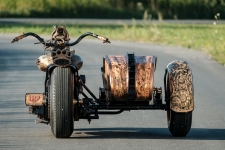 The Recidivist’s sidecar was created in 2017 and will have its world premiere at Sturgis. The sidecar is fully tattooed, both outside and inside. Sidecar tattoos relate to motifs present on the bike, but as it is with tattoos on a human body, with time they change together with the person bearing the tattoos – elements get bigger, change colors, shapes and meanings. That is why on the sidecar there are tattoos parallel to those on the motorcycle, such as the Themis or handcuffs. But it also includes new motifs in the form of 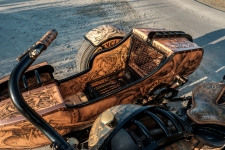 relations to the abstract art of H.R. Giger and Polish artist Zdzislaw Beksinski, as well as inspirations taken from life, such as selected images from the history of Harley-Davidson® company.

The Recidivist can be seen in the USA in the following locations and dates:

About the Author: Miss Caroline

Miss Caroline is the Publisher and Editor of Fast Lane Biker Magazine Delmarva ("FLBD") since its inception in 2008. She holds dual degrees in English Language and Literature, and Business Administration. Her fascination with riding began as a child when she could often be found sneaking off with her brothers' dirt bikes. Her goal is to boost perception of motorcyclists and educate markets on the strength of the motorcycle community as consumers.

Not a Good Day for Riding, But it is a Great Day to get your Christmas Shopping done for your Favorite Biker. Go to flbdelmarva.com and check out the "Motorcycle Mall" Tell Them FLBD Srnt You... Like & Share. #flbd #bikerbuzz #motorcyclemall... flbdelmarva.com

Biker Buzz... Have you heard the rumors. ? FLBD has heard from Rolling Thunder National that 2019 Will be the Last Year for the National Rolling Thunder Demonstration Ride in Washington D.C. We encourage... fastlanebikerdelmarv…

TELL ALL TUESDAY... READ IT, LIKE IT, SHARE IT... Jam-On Productions is inviting individuals with motorcycles, as well as motorcycle groups/organizations who would like to set up a display, to two of their shows in... facebook.com/flbdelm…