This Sliding Bar can be switched on or off in theme options, and can take any widget you throw at it or even fill it with your custom HTML Code. Its perfect for grabbing the attention of your viewers. Choose between 1, 2, 3 or 4 columns, set the background color, widget divider color, activate transparency, a top border or fully disable it on desktop and mobile.

I did it! I went to the infamous OC Bikefest & Delmarva Bike Week!

This was my first time. My first time at the event, and well heck, my first time spending any real time in Delmarva. That said, I tried my best to make it to all the venues and to experience all that I could. I visited events in Ocean City, Salisbury, Snow Hill, and Seaford. I could fill up this entire magazine with all the stuff I got into over the 4 days I was in area, but we’ll just have to hit on the highlights. Let’s see what we can get into.

Romell HD in Seaford, DE – They had an awesome pinstripe artist, some food, and some crafty motorcycle salesmen. It was alright, nothing to write home about. The highlight of that venue was the Monster Truck School Bus that we stopped at on the way back from Seaford to Salisbury. Awesome.

Shorebirds Stadium in Salisbury, MD. – I did the free demo rides. I thoroughly enjoyed the Wall of Death show. I caught a couple minutes of the bikini fashion show. All was great, but the highlight of Shorebirds Stadium by far was the smack-talking boot shine girls and a smoothie, lol. You see I had just gotten off a demo ride and that motorcycle gave off a ton of heat. That smoothie was in the right place at the right time. Everything that Shorebirds Stadium had to offer, whether it was official or not, was awesome. 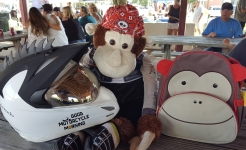 Sturgis Park in Show Hill, MD – They had food, live music, vendors, and free pontoon rides. By time I got there the event was winding down, but I did get a great lunch, and had some great conversation while listening to live music. Time did not allow for me to partake in all the offerings but it was a great location to get away from the hustle and bustle of the main venues for a little while. 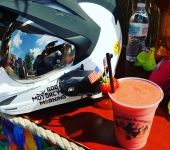 Ocean City, MD – Now this is where the party is at. I did so much in OC. I crashed and burned in a Nascar simulator at the inlet. I did a bunch of shopping at the convention center. I caught some of the performances from the epic bands Molly Hatchet and Lynard Skynard. I rode around the entire city with a 6 ft. tripod and camera strapped to the back of Shady recording anything and everything. I got my dose of the Drunk Bus and then some, and so much more. But the absolute highlight of OC was Cowboy Coast Saloon. That’s where I got to know the cast and crew of FLBD. I rode a mechanical bull, poorly, for about 8 seconds. I had some great food and met some outstanding people.

Alas I did not do this alone. Many folks helped to make this experience a great one. Let’s give credit where credit is due. Thank you to everyone at Fast Lane Biker Delmarva for helping to make this adventure possible, and getting me into the mix. Thank you to David MCmichael for being my partner in crime and for his help behind the camera.

Thank you to spraH Gear for covering our backs during the event. And last but not least, thank you to EJ Rose, Jackie Mae, and Joe Borek for the best damn SightWorks photo ever taken. Good Motorcycle Morning!

Want more? Click over to Youtube.com/sightw to see my video recap of the event!

About the Author: Miss Caroline

Miss Caroline is the Publisher and Editor of Fast Lane Biker Magazine Delmarva ("FLBD") since its inception in 2008. She holds dual degrees in English Language and Literature, and Business Administration. Her fascination with riding began as a child when she could often be found sneaking off with her brothers' dirt bikes. Her goal is to boost perception of motorcyclists and educate markets on the strength of the motorcycle community as consumers.

Not a Good Day for Riding, But it is a Great Day to get your Christmas Shopping done for your Favorite Biker. Go to flbdelmarva.com and check out the "Motorcycle Mall" Tell Them FLBD Srnt You... Like & Share. #flbd #bikerbuzz #motorcyclemall... flbdelmarva.com

Biker Buzz... Have you heard the rumors. ? FLBD has heard from Rolling Thunder National that 2019 Will be the Last Year for the National Rolling Thunder Demonstration Ride in Washington D.C. We encourage... fastlanebikerdelmarv…

TELL ALL TUESDAY... READ IT, LIKE IT, SHARE IT... Jam-On Productions is inviting individuals with motorcycles, as well as motorcycle groups/organizations who would like to set up a display, to two of their shows in... facebook.com/flbdelm…